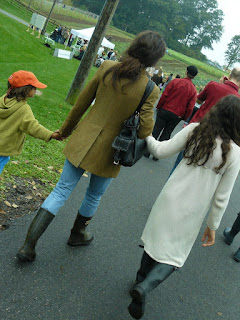 Have your Locavore Lunch and Eat it Too

Harvest is the arc and the aggregate of food in the Valley. Suddenly the summer food spectrum is spread before you. Even with a blight on tomatoes and potatoes and a very bad season for tobacco leaves (no survivors due to wetness, lack of sun and cool temperatures) we are rich in food that goes beyond traditional fall fare. Extended growing initiatives such as moving hoop houses are getting some produce out earlier and later than the three months of summer.

The ancient tradition of making a big fire and dancing to a full moon continues in the Valley. In New York at a relatively new "Farm to Table" establishment, they are just getting the hang of the harvest. At the Tarrytown-based Stone Barns, over 2500 city types showed up to get a little taste of farm life in early October. My friend Chef Donna Fisher and I went to check it out and enter the pie bake off. We got there early as hoards of people jumped off the train and into taxi cabs to check out the harvest at this combination of a non-profit farm and Blue Hill, a for-profit restaurant.

It was the usual harvest stuff except bigger and more dramatic. There wasn't just one but many pigs roasted over a spit and there was a demonstration of butchering and evisceration. Kids squealed and parents pleaded for just one shred of crispy fat. Dress was farmer chic. One woman wore Chanel rain boots over her jeans and her girls sported black muck boots. Food vendors from the City sold scones and croissants and pulled pork sandwiches from the sacrificial pigs were going fast.

Posted by ValleyLocavore at 11:15 PM