The Forager and His Take.... 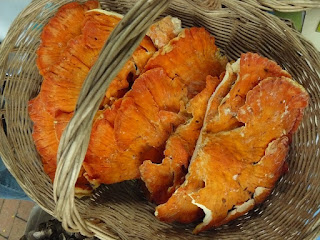 At the Garlic Festival, I ran into a forager who was holding a plastic bag with what looked like a massive brain inside of it. It was a healthy haul of "Chicken of the Woods," (Laetiporus Sulphureus), a mushroom typically found on rotted tree stumps in the forest. The forager and I were standing at the top of the hill taking in the spectacle that is Garlic Fest. The aroma of fried sausage mingled in the air with the scent of roasted coffee beans. We exchanged pleasantries and as usual his behavior was somewhat furtive. He stopped talking and looked to his right and then to his left. When the coast was clear, he reached into the bag and handed over a substantial chunk of the mushroom. I couldn't believe my luck. Chicken of the Woods is not easy to come by. Strange things happen at Garlic Fest, what with the music on solar powered acoustical systems, belly dancing, a riot of exotic foods and fairway spectacles such as Apollo, the guy who grows figs and has arms that seem as though they can squeeze sap right out of a tree.

I examined my gift through the filmy plastic he offered and the forager whispered a recipe. "My step daughter makes chicken fingers by breading and deep frying the mushroom. This part," he said pointing to the stem of the mushroom, "acts like a little handle." He recommended I eat the mushroom soon. "Today is best." he said. I went home and tried his step daughter's recipe and it was nothing short of a revelation. Essentially this mushroom, in the guise of fast food, becomes a protein with the flavor of lobster but none of the sacrifice.

The ultimate locavore lunch is one that is completely local and seasonal. Even the plate for this lunch, a paper bag from the Leeds Package Store, was foraged within a mile of my house. Kale is in the garden and the eggs are from my friend's boyfriend's house in Belchertown. Chicken of the Wood mushroom fries are a matter of provenance. Not are they only available in late summer and early autumn, unless you are a skilled forager, the best shot you have at getting the fungus is to go to the Farmer's Market in Northampton behind Thornes on a Wednesday and ask for Paul. If he is there, he might sell them to you, if he has them.

Posted by ValleyLocavore at 11:10 PM