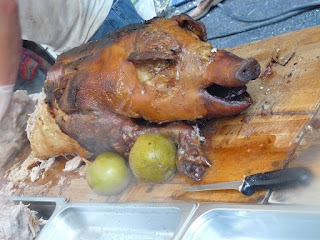 Also, besides the ever rotating pig, there were gardening workshops and lectures. In Covered Barn B, Chef/owner Dan Barber held forth on the superiority of New England root vegetables. "The cold weather makes beets something amazing in winter. To stay warm, the plant turns its own starch into sugar....such sweetness! You only get this in New England and we never say anything about it! All the plants in California do is have sex over and over again." (The menu at Blue Hill at Stone Barns consists of a list of food that is in season, most of it grown on the farm, and many courses are served. Such items as house made ricotta, tomato flavored salt, lardo, tomato water cubes with okra flour with an okra floret as garnish, lardo on slate, chicken hearts on a stick and other novelties are brought to the table with extensive introductions. It is not cheap but it is not average either. When is the last time you had marrow on the thigh bone of a deer with a tiny line up of fish eggs on top?

Barber shared his roasted root vegetable technique for Jerusalem Artichokes. "Get the moisture out of the J-chokes first in a fry pan on top of the stove with olive oil and garlic," he said. "Then blast them in the oven at at least 450 or as much as your oven can take..." At the end of his roasting demonstration, he told the crowd that he believed the rutabaga is going to be "very, very big" this fall. Chef Donna didn't win the pie bake-off. She got third place although her pie was perfection with local MacIntosh Apples and a butter crust. The winner's entry was a recipe from Cordon Bleu and the crust was pate brisee--about as American as a Pugeot.

In the Valley, food fairs continue to be very big, beginning with the Tomato Festival in August, the Garlic Festival, myriad town fairs and of course the Big E, an agricultural extravaganza complete with the Craz-E burger, 1500 calories of bacon, cheese, beef and a glazed donut. The donut acts as a bun. (The Big E Craz-E made national news. Isn't it bad enough that legislators are promoting the Fluffernutter as the state sandwich?)
Posted by ValleyLocavore at 11:13 PM