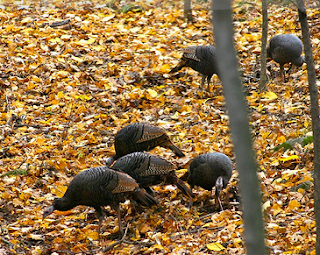 Not all turkey's are meant to be eaten. Wild turkey may not have been eaten at the original Thanksgiving at Plymouth Rock. Accounts vary about what was actually consumed in the 1600s. Some say corn, which we obtained from the natives, and oysters, as well as clams since they were on the Cape. Turkey came along as part of the story. If early settlers did ingest turkey with or without the help of natives Indians, they might have used a brine on the turkey, after shooting it with a musket or wrestling it to the ground.

To brine is to take an entire bird, sans feathers and head, and submerge it into salty water before roasting. A wild turkey is almost all dark meat and as we know, dark meat needs to cook a bit more. This is a good method, the salt submersion, for local turkey as well because it brings out the inherent flavor of the bird and insures that it will cook evenly.

Turkey is a big creature. White and dark meat that respond to different cooking times. If the dark meat is succulent, the white could be compromised. The opposite is true if the white is cooked to perfection. Some cooks get around this by guarding against too much heat with a protective tent of tinfoil over the breast or they inject the white breast meat with liquids such as wine and then some begin the roasting process cooking the turkey with the breast side down (don't even ask about the stuffing) all so that the dark meat gets its chance to cook. Then some cook in a plastic bag but that seems to have gone out of favor. To have a harmonious roast, where white and dark meats are treated equally in the oven, brine ahead of time. The result is a big, juicy bird that will please all of the carnivores at your table.

Chef Deb White of Blue Heron brines a lot of the meats served at the restaurant. On Thanksgiving, all of the birds served as part of the Thanksgiving feast at Blue Heron in Sunderland are prepared in the following manner:

How to Brine a Turkey
by Deb White, Blue Heron Restaurant

*Be sure to use food safe bags.
Posted by ValleyLocavore at 1:23 PM