An Author, A Mayor and A Plan 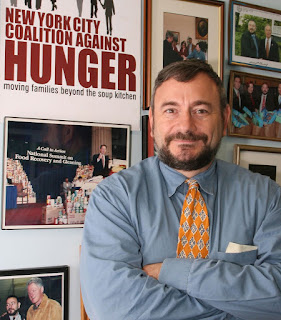 Hunger Summit at Mass Mutual
Several weeks ago at the Mass Mutual Center in Springfield, a New York
author and political activist stood up in front of a crowd of around
150 people to speak his mind about the state of hunger in the U.S. and
the state of things in the Valley. Joel Berg, formerly in the Clinton
Administration as a member of the USDA and currently heading up the
New York City Coalition Against Hunger was keynoting at the first
annual Hunger Summit. "The poor will always be with us," he said. "It
is referenced many times in the bible." Berg is author of "All You Can
Eat, How Hungry is America?"

Sponsored the The Food Bank of Western Mass, Berg was on hand to
provide a big picture on hunger situation in the U.S. Berg's solution
to the 36.2 million Americans living in homes that can't afford enough
food. He comes to this after many years in the field, beginning with
going door to door working with people. His conclusion from early on
has been to get government involved. "Pantries and charity and rock
and roll stars can't fight this alone. The problem is too big," he
said comparing charity to old fashioned bucket brigades, designed to
put out fires. "When is the last time you heard about an entire city
burning down?" he said. "The way we are handling hunger with charity
is not effective." He advocates a $24 billion infusion from the
government to effectively solve the problem. That solution includes an
increase in minimum wage and more money for food stamps. "There need
to be more dignity in this system," he said.

Most of the people witnessing Berg holding forth have seen hunger
first hand. The assembled included people who work for places like
Kate's Kitchen, Rachel's Table, The Center for Sustainable Living,
Holyoke Health Food and Fitness Policy, area Salvation Armies and other organizations. In addition
to those on the front lines were Springfield Mayor Dominic Sarno and
other politicians. Berg took a moment to praise not only the Red Sox
and Francis Perkins, a Mt. Holyoke alum, for her early research on
poverty in Hell's Kitchen in New York. "Those conditions were nothing
like you see now," he said adding that small children were hired to
climb into small areas for construction work, often losing limbs in
the process.

No stranger to the myriad food banks across the country, it is Berg's
impression that The Food Bank in Hatfield, one of more than 200
certified food banks affiliated with Feeding America, is among the
most progressive. "Growing their own food means a focus on nutrition,"
he said and added that initiatives to develop food policy at the state
level is also key to its success. Every year 200,000 lbs of organic
food from The Food Bank Farm in Hadley goes to 400 member agency
programs. Recent numbers show one in every eight residents in
Berkshire, Franklin, Hampden and Hampshire Counties seek food
assistance through the emergency food network, according to The Food
Bank documentation.

Before Berg spoke, Sarno announced a The Springfield Food Policy
Council, a new alliance. According to Food Bank's Executive Director
Andrew Morehouse, the council will bring a diverse group of relevant
stakeholders together on a regular basis. "Youth, seniors, the faith
community, community-based organizations, municipal government and
food-related businesses." Ultimately the collaboration will lead to
affect policy at the state level and access resources. "This will
strengthen the local food system so that all residents will have
access to affordable and nutritious food," said Morehouse. In
Springfield's Mason Square, close to 60% of the K-12 population is
overweight and obese.

Currently the State House leadership is considering a bill to
establish a Massachusetts Food Policy Council that will serve the same
purpose at the state level as the Springfield (and Holyoke and
Worcester) food policy councils. Getting the bill (H. 1138) passed by
the House Ways and Means Committee will require such initiatives as
the Springfield Food Policy council and support from state
representatives. The Food Bank's recent work with Mason Square put a
grocery store in the neighborhood is at a standstill. "The Food Bank
and now the Mason Square Health Task Force are continuing to explore
this option even though the economic crisis has put a damper on this
project," said Morehouse. On Sumner Avenue in Springfield, there has
been a Farmers' Market in the parking lot of Trinity for over ten
years. It attracts vendors from the all over western Mass and
Connecticut. "We’re also looking at other ways for neighborhood
residents to access affordable and nutritious foods such as
transportation to supermarkets," he added. "We’re also supporting
faith- and community-based groups to grow community gardens on
abandoned lots. We expect the Springfield Food Policy Council to
support all of these efforts."


Posted by ValleyLocavore at 7:59 AM