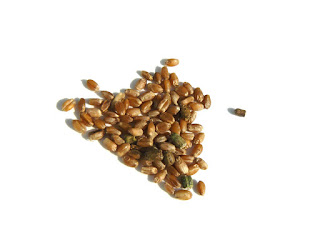 Picked up 2-50 lb bags of spring wheat from Allen at Lazy Acres farm
in Hadley. I was sent by Jonathan at Hungry Ghost in Northampton. My
job was to fetch wheat berries from last years growing experiment and
bring them back to the bakers. For my trouble I would get some local
wheat to make my own bread. The timing couldn't be better. The day
before I lost my source for local cornmeal. The guy over at Food Bank
who used to grind local corn for me on his bicycle was moving on to
greener pastures. Hello? This stuff is not available anywhere else.
The key to eating locally is to make your own bread whether it be corn
bread or wheat bread. Without that, being a locavore is no more a
matter of being a discerning shopper.

I stood next to my in the mud filled driveway of his house and waited
for Allen to come out. A tall guy with a felt hat, he walked very
slowly to my car and held up his hand in greeting. We gave each other
the once over. "I'm here for the grain," I said. "Stay here," he said
and strode over the to the barn and pulled a large board off the door.
It fell open. (So that's what those boards are for...) A boy stood
beyond the barn in front of a field of oats. Cover crop. The boy and I
gave each other the once over. The day was pretty gray but when Allen
came out of the barn carrying the sack, my mood improved. "That's
really it?" I said. This has been a long time coming, this local
wheat. "Yep," he said and tossed the sack in the back seat of my car,
seeds flying all over. I heard this crop was pretty good. Allen came
out with a second bag. I tried to take it from him to put into the car
myself but he shouldered past and tossed it in there, right next to
the other one. Another stream of grain. I asked him about the gluten
content. "Oh it's springy alright," said Allen. "It passed the chew
test really well." With the rain, the cool summer, the lack of sun and
the heretofore near impossible task of growing wheat in western Mass,
Allen's accomplishment is nothing short of a miracle.

Back at Hungry Ghost, one of the bakers was chewing away on a piece of
bread made from this very grain. This bakery is famous for its
opinionated help, wood fired stove, superior bread and flour all over
the place. The combination of the mud on my shoes from Allen's farm
and the flour on the floor at the bakery created a tsunami effect.
Coming through the screen door, I fell to the right and then to the
left. It was the smell of bread and this little wonderloaf on the
cutting board that kept me aloft. After an experimental taste I had
steady myself once again. Plenty of flavor, nice gluten content making
it airy and soft with, then, the lovely bite of sourdough. Now, at least as of
this writing, a perfectly local bread can be eaten by all. Bread is the heart of everything whether the grain be corn or wheat. From the Mayans to the Europeans in one short, historical week in the Pioneer Valley.
Posted by ValleyLocavore at 11:20 AM

Fall To Do List - Stalking the Bag of Spuds 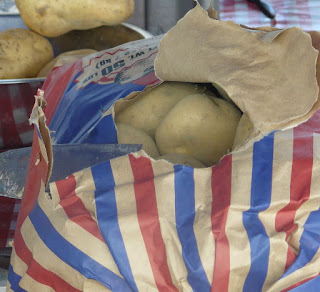 All over the world, gleaners are busy during the harvest collecting the remaining carrots, tomatoes and kale that has been overlooked at the end of the season. This is free to the taker and appreciated by the recipients.

Gleaning takes many forms. The next couple of weeks are ideal for gleaning without getting all dirty. Take a drive along routes 5 and 10 to scout out large 50 lb bags of the region's finest onions and potatoes. Stock up on roots for the winter when prices for local sacks of spuds are as low as 20 cents a pound. Local onions and potatoes are on sale at various farms, farm shares (CSAs) stores like Atkins and Serios and other small stores. Store out of the light to prevent sprouting. The cooler the environment the better. Temperatures should range from 34 to 60 degrees. Keep dry. If you don't have a root cellar, any dark cool place is good. Use paper or cloth sacks to prevent light from getting to the vegetables. In addition, try to keep somewhat ventilated. There is nothing like rooting around for a local spud in January and finding exactly that, with many more to spare, to keep going through out the winter. Saves quite a bit on gas, going to the store and money, of course.
Posted by ValleyLocavore at 11:17 AM 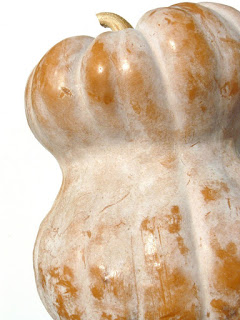 This recipe is made from a pumpkin given to me by seed saver and grower Dan Botkin of Laughing Dog Farm. Known for its flavor, the Shishigatani Pumpkin has no rival but can be approximated. See recipe below. For more information about getting seeds for the Shishi and to learn about seeds in general, Laughing Dog, a farm in Gill, is a good repository of information. A former commune, Laughing Dog is now a place where fig trees, goats, Shishigatani Pumpkins and other exotic forms of flora and fauna exist in harmony all year round.

Cook onions in butter with sage and thyme until caramelized (cooked slowly until the sugars are released, around 20 minutes.)
Peel squash, cut in half, remove seeds and place in baking dish, skillet, what have you.
Cover with olive oil or butter and bake at 350 until soft (around 40 minutes)
Boil potato in sauce pan until soft but not too soft. Reserve the water.
Add squash pieces and potatoes to onions and all allow flavors to meld
Add some of the potato water to thin soup
Season with dried red pepper and salt, as well as ground black pepper
Mix together in a food processor, blender or one of those immersion wands
Put back on to heat and add cream or yogurt.
Heat until blended and serve with spot of cream on top and sage leaf, if you have one.
Posted by ValleyLocavore at 11:14 AM