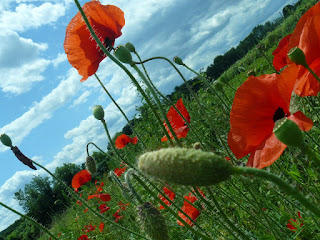 This summer at the farms in the Valley there were two marriages and a
baby born in one of the worst seasons for blight and bad weather we've
seen in a long time. Although that might sound like a Natalie Merchant
song, with the dust from wagon wheels coming up next, it is all true.
Ryan Voilard and Sarah Ingraham of Red Fire Farm got married at their
barn in Granby as did Meaghan Arquin and Rob Lynch, up at Riverland
Farm in Sunderland. Last month, at The Kitchen Garden, Caroline Pam
gave birth to Oliver, her second child. These young farmers run
membership driven farms, also known as CSA's (Community Sponsored
Agriculture) and for several years now are making a go of it despite
inconsistent weather and economic patterns. The Food Bank Farm of
Hadley has hung in there since 1991 as one of the first CSAs in the
country. Things have changed since shareholders were invited to share
the ups and downs of a farm by investing in it at the beginning of the
season in return for a share of the harvest in good times and in bad.
Now farmers are tracking fickle weather patterns with a Blackberries
strapped to their jeans and the number of CSAs in the region has gone
from two in '91 to a total of 17.

A press release issued last month from The Food Bank of Western Mass
announced that The Food Bank Farm would be no more. The reasons are
more complicated than 'it was a tough couple of years for the harvest'
because this farm is unlike the others in the area or the country. The
way Food Bank Farm works is like a typical CSA in that shareholder
dollars shelled out at the beginning of the season, pay for the
operation of the farm. The exception with Food Bank Farm is that food
is grown not only for shareholders but for the Food Bank of Western
Mass in Hatfield to distribute to agencies--200,000 pounds of it this
year. In a deal struck with Docter back in 1991, The Food Bank of
Western Mass in Hatfield bought a 32 acre farm in Hadley. Docter could
farm it and realize his dream of providing fresh produce to the hungry
but it was up to him to pay all expenses, including the lease. The
money would come from shareholder dollars. This unique model has been
operating for almost twenty years. In Hadley, Docter has been both a
fixture, driving all manner of farm machinery on Bay Road, and the
future.
Posted by ValleyLocavore at 10:22 PM 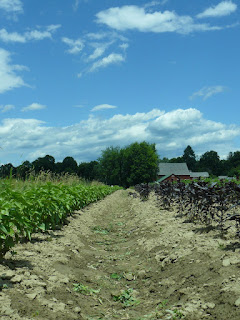 Docter farmed organically back in the day when UMass
extension was just beginning research on pesticide farming. There was
some organic farming going on but not on a large scale. There was too
much at stake. For traditional potato and tomato farmers, no spraying
meant vulnerability to blight and unpredictable weather. But Docter
managed to pull if off. The farm's roster of crops included corn, many
kinds of greens, melons, garlic, and other root vegetables, along with
experimental crops. A bakery that produced cookies, pies and corn
muffins made from the corn grown on the farm was built and when the
place was in full swing, hens and roosters dotted the barn yard, a sea
of red poppies could be plucked from rows of flowers and lunch was
being cooked up outside under a little tent. Food Bank Farm was so
popular that no one ever left. An added element of bliss was the
interns, a tanned subculture of laborers, many of whom trained under
Docter. Rob Lynch and Meaghan Arquin started Riverand after working at
Food Bank Farm. "There was a lot coupling going on that summer," said
Arquin. "I think there were at least four who got married."

The last time I visited the farm, it was late in the season. The
flowers were mowed down and the only crops left were rows and rows of
kale. As I drove in and pulled around a lake sized puddle in the
parking lot, a cat came across my path with a dead mouse in its jaws.
Farm life as usual. Inside, things were not as usual. Inside the barn,
Docter was surrounded by a potatoes, winter greens with five kinds of
apples and a group of shareholders surrounding him. Michael's Maurice Sendak universe was closing in. "Can't we just write some letters?" inquired one person. Docter said he was
sorry but it was truly the end. His eyes were red. Someone else asked
if there was anything at all that they could do to which he replied,
"No, it was final, a mutual decision..." he said shaking his head and
looking down. Meanwhile at the register up front, Sherrie munched on
an organic, chocolate chip oatmeal cookie. She has been with the Farm
since its inception. "It's a combination of things," she said as she
rang people up and commiserated. "Some of this land has to lie fallow
for a while...."

After farming at the pace Docter was farming, it could be that more
than just the land needed to lie fallow. Two years ago, Docter asked
former intern Ben Perrault to take over as farm manager of the Food
Bank Farm. Perrault and his wife Liz own Mountain View Farm in
Easthampton across the river. While Ben and Liz handled the farming,
Docter managed the farm store at Food Bank Farm in Hadley.

Typically a farm will sell some products from local sellers of eggs,
milk, pickles and some cheese. The Food Bank Farm store, on the other
hand, featured local producers of grass fed beef, cheese, dairy, eggs
and all at prices that would put Whole Foods to shame. Wild caught
bluefish, Atlantic cod, responsibly farmed salmon were for sale as
were chickens from small producers at the Crazy Eddie price of $1.99 a
pound for thighs.

In the span of two decades, Docter went from hunger maverick to
organic farmer to uber grocer. It was a sweet ride for Food Bank Farm
shareholders, while it lasted. Now they are being given the choice to
either stay with Docter and join his new CSA or hook up with Mountain
View and pick up their food in Easthampton. Food Bank Farm will continue to oversee the operation and distribute food as always.

Last year Docter and his wife Lynne purchased some property abutting the Food Bank and have hired Ray
Young, another former intern, to run a new CSA. Docter says he is
scared to be starting from scratch on his own but is more concerned
about shareholders. "Things change, and yes, to everything there is a
season," he said. "I just feel bad about this community we created."
He looked around the barn at the people milling about and said, "Oh
well, I guess we just move the community up the road..." The name of
his new CSA is, "Next Barn Over." Let the wild rumpus begin!
Posted by ValleyLocavore at 10:01 PM