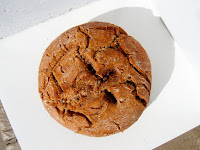 Bread with local wheat
Crunchy on the outside, steaming hot and fluffy on the inside, this bread recipe is as easy as it gets.

"The Rising" takes place of its own accord. The human merely has to mix, wait for the yeast do its magic, flip and bake. How-To Video

Posted by ValleyLocavore at 11:12 AM 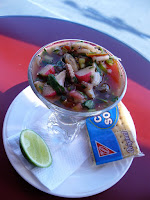 Airport food in Central America is Seafood Cocktail Mix in San Salvadore...read on about living the green dream in Costa Rica at GoNomad.
Posted by ValleyLocavore at 6:32 PM 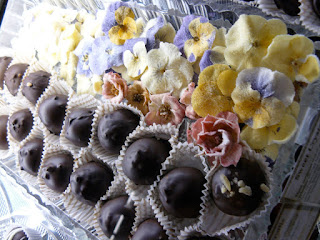 Feast of the Senses

Love is chemistry. People say that they know the minute they lay eyes on one another they knew it was time to go big or go home. Love at first sight is hard to miss; your heart beats faster, you feel it in your gut, your loins, speech is meaningless. At first, every day is Valentine's Day. Every breakfast, every cupcake, every date, every caress is seamless. Later, when the calendar falls on February, there is the chance to experience infatuation all over again. Sensory overload can be called upon to get all burners going.


Many think that we form our attractions based on scent alone. Love can be a rose, love can be a cookie, love can be the whiff of another, and love can a be a night to remember in a rambling old Inn. And the quick, yet significant, fix of chocolate is the ultimate example of synesthesia with a full court press of sight, smell, taste and ... if limbic (see below) is a sense, then that one finally.


Chocolate, this weekend, will be celebrated at the Old Deerfield Inn in Old Deerfield and at the Inn at Norton Hill in Ashfield. The gems picture above from Heavenly Chocolate at Thorne's Market in Northampton sells a combination of chili pepper and cocoa concoction making it possible for the shyest person to bust a move.

Jerry McCarthy is a man who knows about the power of scent. It can be reason we pick our partners, although we might not realize it. "The sense of smell is near the limbic area, the sensual area of the brain," he says. "Our sense of smell causes us to impulsively do things. That is why they put perfume near the door in stores. Scent is a much more powerful influence on our behavior, much more powerful than our sense of touch or hearing." McCarthy runs Leyden House up in Leyden. An importer of shea butter, almond oil and things like distilled lavender oil, his expertise is in pairing his oils and creams with scent. Customers of Leyden House include spas and individuals interested in unique fragrances and massage oil. Jojoba, for example, is available. It is more expensive to other oils and is known for its "glide appeal."

Scents with specificity abound. For example, the makings of a truly sensual bath can be concocted with what McCarthy describes as aphrodisiac scents. That is a blend of clary sage, patchouli and Ylang Ylang which creates a floral aroma with an earthy undertone. McCarthy is in love with the combination of rose and almond oil. "Rose is an essential oil, it is spelled the same in German and French and English. Rose becomes, "Eros," the god of love. To bring your loved one to aquatic ecstasy, a tub of rose scented almond oil that is strewn with rose petals could put the limbic area of the brain into synesthetic overdrive. Products can be purchased at Joya and River Valley Market in Northampton or through the company website which is www.leydenhouse.com.

Farm to Orchard to Table

At Tabellas Restaurant in Amherst, Farm to Table Dining protocol makes for one of the only restaurants in the area that serves local bubbly.  At dinner, if you happen to visit Tabellas in Amherst, a recommended pairing of hard cider is provided by a man with soulful eyes. The effect of the elixir, West County Cider in this case, is quite profound and if love is in the air, that too becomes profound. Soulful eyes describes three dishes to pair with cider. First there is the house made chicken liver pate wrapped in bacon because the gamy of the meat is so well matched by the fizz of the cider.  He also recommends the signature lemon peppercorn chick pea fries for a lighter version combining heavy with light. Finally from the main courses, he recommends a pairing of hard cider with a grilled Pork Loin in a sauce of hard cider and bourbon graze. Besides the pedigreed food and romantic local bubbly, what is very cozy and intimate about the place is the interior. Dark wood, dark interior and a couple of corner booths provide an atmosphere where all sorts of sensory exploration can take place. Early or late reservations recommended for obvious reasons on Valentine's Day.

And the source of local libation is the tiny town of Colrain where the country's first orchards pressed apples into hard cider. Traditionally fermented cider was the only cider. It is growing in popularity here but has an established following and has for years in Europe. In Colrain, West County Cider is a 1400 tree orchard of French, American and English apple trees. The hard cider is made without additives or concentrate according to Judith Maloney,  who started with just a "clearing in the woods" in 1984. "The Redfield is best for love," she says of the six or so varieties they sell. "It has a slight spritz it is made from apples whose flesh is red when you cut into it." The red of the apple can be seen through the clear glass bottles it is sold in. This champagne alternative, an edgier champs, if you will, can be found at area restaurants and liquor stores. A chief appeal is that it hits at least four of the senses; sight, touch, taste, and fizz could be heard or felt as a tickle.

Henry Miller said that in Paris when it rains, there only two things to do; make love or play cards. If you decide to stay at a B and B up in the hilltowns, pray for rain. Literature provided in the rooms at The Inn at Norton Hill lists  two local attractions: The Ashfield Hardware Store and the Belding Memorial Library. The staff is barely visible and the old mansion is newly restored with the original open hearth and rooms with wide floorboards and fireplaces.

Then there is the Yellow Room. With three three walls of windows and French Doors, it is strictly a colonial affair at night. With its four poster and hand made quilt a view of the Juliet Balcony morning explodes in light and color followed by breakfast in bed.

Across the street, groceries, meals, hard cider can be consumed ravenously before retreating back to Valentine exertions. More chocolates are are available for restorative purposes. They are Elmer's house brand and made by an outfit in New Hampshire called Unbridled Chocolate. They are all hand made with imported chocolate and come in rainbow flavors ranging from mint to espresso. Best is the butternut crunch because of the yin and yang effect of almost bittersweet dark chocolate and salty butter.

Posted by ValleyLocavore at 7:12 AM

This Week on Farm 2 Fork

In an interview with Dorothy Suput about a "Strolling of the Heifers Microloan Fund for New England Farmers" Tuesday night, Don Persons learned about available farm financing.

Suput said that the program is in its second year. Funding for farms with an annual gross of $250,000 or less is partnership between the Chittenden Bank and "The Carrot Project." Loans range from $1,000 to $15,000. This is the second year of the program. Click here for more information.  The next deadline is February 26, 2010.

Sources for the loan's initial capital includes money from “Farm Relief” benefit concerts featuring Pete Seeger, his grandson Tao Rodriguez-Seeger, and bluesman Guy Davis in September, 2008 and by the Paul Winter Consort in September, 2009, as well as major grants from the Thomas Thompson Trust and Green Mountain Coffee Roasters; and private investments made through The Carrot Project.

An interview with Andrew Huckins, the Hampshire student who started the Northampton Winter Farmers' Market revealed his vision behind the weekly food, music and art fest.  "I want to broaden the scope of this winter farmers' market with music also. The musicians just wanted a place to play together. Now they're coming to the market on Saturday. The vendors really like it," said Huckins. This week's Thornes Winter Farmers' Market will feature a "mapping" art exhibit and music, as well as food from 9 a.m. to 2 p.m. in Northampton. Check out Andrew's facebook page to learn more about music and upcoming news for the market.

Posted by ValleyLocavore at 9:09 AM

After several months debate, the Northampton City Council has approved an expenditure of $990,000 for a portion of 145 acres of farmland in Florence for mixed use including farmland, according to the Daily Hampshire Gazette. The money will be appropriated the CPA (Conservation Protection Act) funds. An initial deposit of $80,000 from the CPA's reserve fund has been approved. The remaining $910,000 will be borrowed over a 15 year period, according to the Gazette.

With an assessed value of approximately $2.475 M, the balance of which is expected to come from grants and other fund raising, the 145-acre acquisition is not a done deal. The Trust for Public Land has partnered with the City to negotiate with the sellers to finalize the transaction.

Read the entire story as reported above the fold in today's edition of the Daily Hampshire Gazette...
(Photo by Seth Gregory)
Posted by ValleyLocavore at 8:49 AM

Hamp Takes Back the Land: Make that 2 Farms!

With mortgage foreclosures flooding the housing market and impending threats of food shortages, Hamp is taking steps to take back the land...

After a significant meeting of the City Council, the Daily Hampshire Gazette reported the following:

"Northampton officials advanced a plan Wednesday to buy not only the Bean family farm off Spring Street, but the abutting - and much bigger - Allard Farm."  Click here for the full Hampshire Gazette story.....

As of 1/25, the City Council has approved the purchase of the Bean Farm. The next step is to get the city's CPC to approve preservation funds....the deadline looms.
Posted by ValleyLocavore at 9:11 AM