Go to youtube VIDEO link by clicking here.....
Posted by ValleyLocavore at 11:13 AM Links to this post 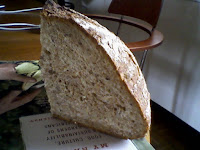 10:14 a.m.
Union Square Farmers' Market
Fluffy and crusty on the outside bread made from wheat grown in Ithica, stone ground, and sold at a stand, the first grain vendor allowed at the Union Square farmers' market. The farm, Cayuga Pure Organic,  was founded by Tycho Dan, among others.
"Vegan, organic, and kosher," says one Tycho Dan's partners to vendors to passersby. "Not sure about the vegan part," Tycho Dan says to me. A half a loaf of whole wheat bread sells for $4.50 causes quite a stir, even in New York.

I learn that it is made from hard spring wheat flour, stone ground on the farm. No white flour, all local. This bread has the kind of rise no seen ever with bread made with the whole wheat, no matter hot fine those grains are ground. When pressed, Tycho Dan reveals that baker Keith Cohen uses a secret mixture combining sourdough starter and yeast.

He cannot reveal the ratio. In fact, Tycho Dan can't even tell me where the bread is baked. The Union Square Farmers' Market's vendor criteria prevents it, due to the fact that the bakery is not a farm.
A customer walks up and asks for a sample. She chews, frowns and asks, "Is this bread baked in a wood fired oven?"  Tycho Dan replies,  "No, but the oven is brick and was built back in 1926." She nods sagely and walks away. "People think they know it all," he says and laughs. Tycho Dan has been up since 3 am when the truck was packed, the crew drove down to the city, and set up in the dark. To try the bread if you can't make the Wednesday Farmers' Market in NYC, try Orwasher's Bakery on the upper east side.
Posted by ValleyLocavore at 11:24 AM Links to this post 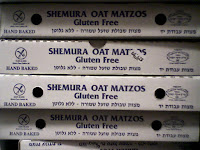 First of the season fiddleheads 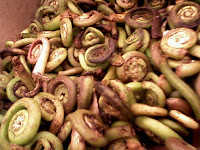 EVENT: Grow Your Own Maple Syrup 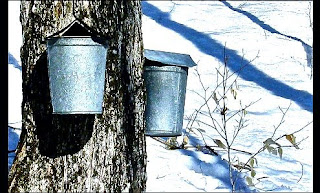 On Friday, March 26th, at 7 p.m. at the Wendell Free Library, two short films on maple sugaring and maple products will be shown. The films are local filmmaker Steve Alves’ "A Sweet Tradition" and a DVD on maple candy and cream. Wendell sugarmaker Bill Facey will discuss the fine points of making quality maple syrup. The evening is sponsored by the Wendell Agricultural Commission. For more information, call 978-544-8604.
Posted by ValleyLocavore at 3:30 PM Links to this post

More Jamie, this time at TED, ranting to intellectuals..."school lunches are run by accountants....you can't duck and dive, all you can do is buy cheaper shit." Jamie Oliver's TED Prize wish: Teach every child about food | Video on TED.com
Posted by ValleyLocavore at 9:44 AM Links to this post 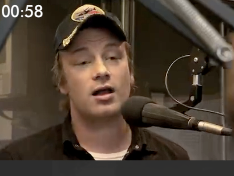 Finally, sort of a solution to one of the causes to childhood obesity, a local and national crisis due to processed foods and school food mediocrity. This British chef uses the media to kick some U.S. butt by exposing truck loads of fat and pizza for breakfast....view video. Considering the obstacles, both political and financial, it is a wonder that so much local food is being bought by area schools. Last year, 205 farms in the state sold food to Massachusetts schools according to Kelly Erwin, director of the Farm to School program in Amherst, MA. In a recent Hampshire Gazette story, Erwin, Senator Stan Rosenberg, Andrew Morehouse of the Food Bank and others weigh in on recent legislation to increase school spending on local food. For the entire story in the DAILY HAMPSHIRE GAZETTE, read on.
Posted by ValleyLocavore at 1:50 PM Links to this post

Grow Your Own: Gardening 101 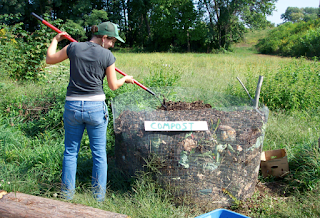 In a couple of weeks, Molly Merritt will be teaching Gardening 101 as part of Montview Neighborhood Farm's Workshop Series. Education Director Lisa DePiano's impetus for providing this course is a response to people's increased interest in growing their own vegetables. Advanced courses such as "Permaculture Fundamentals" will be offered also. Molly is the annual vegetable grower at Montview, a small, human powered farm located on city owned conservation land in downtown Northampton.
ValleyLocavore: Molly, what made you want to teach this class?
Molly Merritt: I have been interested in organic gardening since I was a teenager. I have apprenticed on various farms in New York and Massachusetts and studied sustainable agricultural at Hampshire College.
VL: What will the workshop entail?
MM: Soil testing and amendment (correcting soil contents), a few methods of bed preparation and the basics of growing crops from seed to harvest.
VL: Will the workshop be hands on?
MM: I will be giving participants a sample planting schedule, which is concise guide to what to plant when. I will also give them a resource list for helpful materials.
VL: When and how much?
MM: The workshop costs $25 to $40 based on ability to pay. No one will be turned away. It will be held on Saturday, April 18th from 10 a.m. to 12 a.m. People can register by sending an e-mail to: montview@pedalpeople.com or by calling 413-825-6795.
Posted by ValleyLocavore at 12:39 PM Links to this post

Why? Because We Need the Eggs! 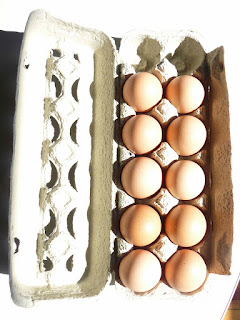 Are 3 hens per household enough?

As interest in backyard chicken farming grows, so does concern at the civic level about how to maintain zoning restrictions. Recent stories in the Daily Hampshire Gazette reveal a debate about increasing the number of three hens per household for Northampton Residents.

Ever thought about joining the ranks of backyard chicken farmers. Hens make great pets, roosters need only to drop by every once in a while and eggs are free.

There is a lot of talk these about keeping chickens. Families from San Francisco to New York City and the rest of us are reaching back into time to figure out what our ancestors knew best: Grow Your Own.....

Organic eggs that are not mass produced, such as the kind from hens raised at Diemand Farm in Wendell, are better for you and the land. Less travel, more flavor and a better life for the hens. Since the film Food, Inc. revealed strange practices at large scale chicken processing plants, demand for local eggs is growing.

The Pioneer Valley Chicken Association of Western Mass offers group membership and lots of useful information offered by locals. Monthly workshops are offered at area farms.
Posted by ValleyLocavore at 2:22 PM Links to this post 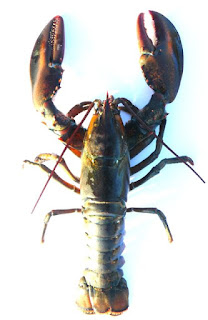 1. Collect all the leftover shells after the lobster feast.
2. Remove the gill feathers, tamale (green stuff—digestive), coral (eggs) and lobster meat.
2. Reserve gill feathers, tamale, coral and meat. They will be added later to the bisque.
3. Remove any other leftover stuff such as eyes and lungs.
4. Coat shells in olive oil and place in roasting pan for around 30 minutes at around 340 degrees (be super careful not to burn!).
5. Make stock using leftover lobster water or clam juice, and add a mixture of chopped medium onion, 2 cloves finely diced garlic, a rib of diced celery and a finely diced medium carrot as well as several sprigs of thyme.
6. When the shells are nice and brittle, remove from pan and de-glaze for any leftover flavor.
7. Put the shells in a brown paper bag and break into tiny pieces with a hammer. This is best done outside or on the fire escape.
8. Place all the tiny shell pieces in a pan with a stick of butter.
9. Melt butter and shells and put mixture into a food processor.
10. Mix until shells are ground as fine as possible.
11. Drain lobster-infused butter using a cheese cloth and discarding the shell.
12. Thicken stock with a couple of handfuls of rice.
13. Add lobster-infused butter to stock and 1/2 cup of sherry (optional).
14. Bring to boil and simmer for 10 minutes.
15. Taste and adjust as you see fit by adding coral and about 1/2 cup cream (optional).
16. Add leftover lobster meat.
17. Serve with lobster gill feathers as garnish.
18. Toast slices of baguette and slather with tamale that has been cooked with a bit of butter and a very small amount of onion.
Posted by ValleyLocavore at 9:13 AM Links to this post