Deadline for readers from author of "Diet for a Small Planet" 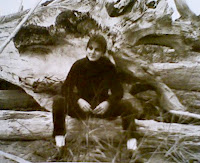 At a lecture yesterday at Smith, Frances Moore Lappe, spoke of a city where people are planting food everywhere, just in case they run out. They are even planting food in graveyards. Francis Moore Lappe wrote Diet for a Small Planet when she was 26. This is a photo of her at the time when she was musing on the phenomenon of hunger amidst abundance. In the Opening Note of her new book she writes, "...the world is in the grip of a financial crisis that's created 100 million new victims of hunger - pushing the total over one billion, higher than ever in history. Andrew Simms of the New Economics Foundation in London tells us that "[we]e could literally be nine meals from anarchy and we are still in denial...."
She follows with "Are you scared? I know I am."  Now she is a sleek, sixty something person with the moves of a dancer and the energy of a lioness protecting her cubs. We are her cubs and she is tireless. In her new book, "Liberation Ecology," her 16th, she recommends that we learn to think like an ecosystem and to do that some reframing has to happen. She poses disempowering ideas such as: "No Growth is the Answer!"  After each idea is a "reframe" which in this case "Since what we've been calling "growth" is largely an economics of waste and destruction, let's call it that. Let's reserve "growth" to describe that which aligns with nature's rules to promote greater health....."

(During the lecture in the Weinstein Auditorium, a student sitting in front of me across the aisle put down his notebook and began taking off his sneakers off, one at a time. Then he took off his socks.  He held one up and smelled it thoughtfully. I guess that's normal.)
What is not normal is that Frances Moore Lappe's new book is in limited edition. There were only 1500 copies printed and her intent is to get feedback from readers before she publishes a final draft. Responses due no later than May 1, 2010! Her plan is to re-frame and edit the book based on reader ideas. The book can be ordered at smallplanet.org.

How's that for thinking like an ecosystem?
Posted by ValleyLocavore at 12:39 PM