Grow Your Own: A Great Day for Locavores 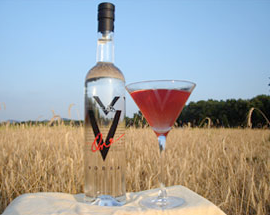 Mixed Marriage Wins Hands Down, a great day for locavores!

Some say Paul Kozub is a marketing genius, some say he is a vodka genius but others say that the stuff in those pyrotechnical display bottles all over the Valley is worth the price.

Over the weekend, when the rest of us were relaxing in the beautiful weather, a panel of hard-working spirits experts convened in San Francisco to taste vodka. This contest, for which it takes more than a passing interest in booze to judge, is purely taste-based. No information was given to judges during to competition about price or brand or country of origin.

In the category of non-flavored vodka, Kozub's V-One was given a "Double Gold" award among 200 entrants. (The top vodka, the winner of all of the Double Golds was Chase Vodka from Herefordshire, England priced at $40 per bottle.)

For Kozub, it all in the name of local sustainability. "I've been at this for four years, my family is from Hadley and the spelt is from Hadley," says Kozub. "I'm in it for the long run." He plans to sell the vodka in all 50 states in five years time. Although the distillery is in Poland, it is owned by a local person there.

If you're a believer in ingredients, V-1 is made with spelt, some of it grown by Allen Zuchowski of Lazy Acres Farm in Hadley where it is harvested and shipped to the distillery in Poland. If you're a believer in process, the ethanol used to distill is the cleanest Kozub can find -- 97% pure. He claims that spelt is the best ingredient over potato or wheat based on testing 40 recipes over a two year period.

This is a great day for locavores. Now in the category of local spirits, there is wine, beer, mead, hard cider and now vodka. And Zuchowski's farm is also producing spelt and wheat for Hungry Ghost, Wheat Berry in Amherst and others making and selling bread. This latest entry in the list of local food makes the wait for corn and tomatoes in August just a bit easier on all of us.
Posted by ValleyLocavore at 3:16 PM