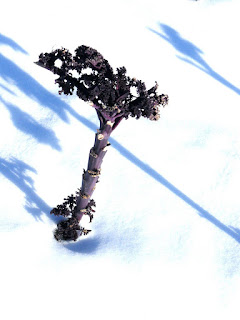 Drove through town in deep winter watching a jogger run in place at the light, ear buds under his hat. It is a long light. He stops running and begins to play air guitar. Then the light changed and we all went back to what we were doing. Driving out to the river, looking for signs of life in the snow covered fields where corn was growing just months ago, I'm sure there's gotta be kale.

I drive past what looks like a guy I know, on a bike and behind his bike is a box on wheels, a box large enough to transport at least 100 lbs of food.  He is dressed in orange and yellow, like the peddle people. The guy, a farmer I know, and I exchange glances and he spits. The thing about being a locavore is that all your food is foraged from nearby and you meet everybody who feeds you.  I know this guy is hauling root veggies to another farm or winter farmer's market or Serios or someplace like that.  Root vegetables and probably kale.....

There is a bumper sticker that people have that simply says, "I Love Kale!"  If you cook it right, the humble, wrinkled kale plant is pretty tasty and of course it is one of the only plants that are edible that is the last one standing in winter. You can go out in 19 degree temperature, pick some kale and bring it in to the house. It is hearty, like New Englanders.

Dino Kale Sunny Side Up

Grab some kale out of the snow or off the shelf at the store or off a dusty table at your deep winter storage CSA. Cut it up into ribbons, discarding the ribs. If it is at all possible, get what is called "Dino" kale which is so named because of its wrinkled form. Dino kale is sweet. This recipe calls for a nest of fried kale with a fried egg on top. Take the ribbons of kale and drop them directly into a fry pan of almost,  but not quite smoking oil. Remove after around a minute. They will be almost, but not quite, brown, yet nice and crispy. Blot to remove oil using a cloth, not a paper towel....not the Shroud of Turin either....and salt lightly. Fry an egg and gently place it on top of the nest of kale. Deep winter acts of love deserve bumper stickers.

NEXT WEEK:   Venison via Cooperstown
Posted by ValleyLocavore at 10:05 AM