I break for asparagus, part 1 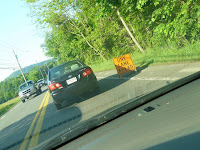 Hadley Grass Demand Outgrows Supply.....
On Rt. 116, they are rerouting the road, they being the state, to accommodate the local market's trade. When the Hadley grass is in, over 100 lbs of native aspsaragus hit the loading dock at Atkins Farm of Amherst every day. It still isn't enough for customers. The legacy crop, once an economic mainstay of the Valley continues to be in short supply in the peak of the season. "We have four main sources but it is still not enough," says John Koslowski who has been produce manager of Atkins Farm for 40 years.
Spring isn't the busiest time of the year for Atkins but it kicks off the season and the demand for asparagus is more than the store and local farmers can handle. The store sells tons of asparagus every summer. Koslowski buys from four local farms. "I've got guys growing more for me, and guys growing a couple of acres. I am begging for more. People want to buy local and we try to provide it but come asparagus season, there is just not enough." He supplements with asparagus from California and Canada."I wish we had more local but during the season, people just have to have their asparagus."
"I break for asparagus" continued....
Posted by ValleyLocavore at 9:03 PM

I break for asparagus, part 2 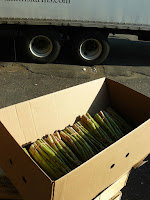 Construction is currently underway.......
to expand the produce section in the front of the store and Rt. 116 is being re-alligned to make room for that at the intersection where Bay Road meets the highway. "They've been talking about fixing that corner for 25 years," said owner Pauline Lannon who adds that there will be 2 roundabouts, one where the white barn used to be (across from Atkins) and one further down Bay Road. "It is our land on both sides of the road," she says in reference to Rt. 116. "We will be building out."

Atkins, once a humble garage full of apples for sale, has turned into something more over the past since its merger with a competing orchard across the street in 1970. The fruit stand opened in 1962 and in the 1800s, the Atkins family planted their first fruit trees in Amherst.
The first major upgrade was cider donuts. Now, the apple stand has blossomed into a store with not only a fish and meat counter but attractions. In summer, ice cream, in autumn, scarecrow contest, at Easter, an egg hunt and in summer they do a brisk business as farmers bring a steady supply of plants and veggies hot off the vine, due to the proximity of the store to local farms. At the end of June, they will be selling wine and beer near the gift section.
Expect to see asparagus through the middle of June before the tomatoes and corn, but right around the time beer and wine go on the shelves at Atkins.
Posted by ValleyLocavore at 9:01 PM

"I feel summer creeping in and I'm tired of this town again...."

If you find yourself feeling Tom Pettyish this time of year, check our a little, hard to find, wild green called sorrel. You can't just waltz into any store with a coupla bucks in your sweaty paw. Sorrel is hard to get.
Relatives, farmers and gardeners might be a source if they're growing it or have some wild. Friends in Florence have it in their garden. They make soup with it.  A delicate lemon flavor in a slightly creamy broth. So spring, so green, so full life the tender shoots plant happiness in body and mind.
Sorrel has the consistency of spinach with a big wave of citrus, especially when mature, around 6" tall in the leaf. For future use, puree and freeze in ice cube trays. When you feel winter creeping in and you're tired of this town again, a hit of sorrel with pasta and you've got to put on that party dress.
Posted by ValleyLocavore at 7:36 AM