RECIPE OF THE WEEK: Winter Radish 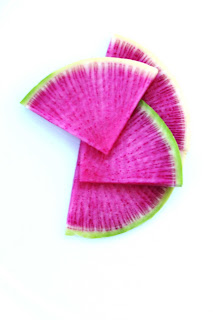 Last year in a barn at a food fest for Thanksgiving there were tables upon tables heaped with food. It was early November, early in the season of holidays and it was as if it was the last time anybody could get a local carrot, or a bunch of celery or a turkey, such was the rush to collect as much as possible.

The scene was urgent and fragrant and in the middle of it all was a dish with something psychedelic on it.

Passers-by paused. Some noticed the little bowl of brown sauce next to the psychedelic substance. One guy took a sliver of pink, dipped it into the sauce and bit in. Loud crunch. Trippy smile.

The "red-flesh mild tri-color radish" is from Japan, according to a seed publication, and big and white as a softball. It can be pulled up all winter in this climate and is right there under the packed dirt and snow. As for taste, it is as mild as it is colorful.

Grown in Hadley at Winter Moon and sold at River Valley Market, the psychedelic radish, formerly known as a "Watermelon Radish" can be cooked but why hide its light under a bushel? The sauce it was served with in the barn last year was a Ginger Miso dressing made by Appalachian Naturals of Goshen, MA works for this mild winter veggie in sixties garb. Or just mix up some yogurt with ginger and honey....the radish will abide.
Posted by ValleyLocavore at 9:09 AM