Lobster was considered "trash fish" by New Englanders back in the colonial days. Fishermen kept them for their families and employees fed them to the help. Lobster was plentiful, back when we had more fish when we knew what to do with, and cod was king. Now lobster has risen in the ranks and become plentiful again in the recent years. Pricing remains high but if you find yourself at the shore, splurge. There is nothing like lobster for a bite of summer, a swallow of the past and after the feast, lobster deja vu in the form of a bisque.

The easiest manner in which to kill a lobster, let's face, that is what you are doing, is to steam or boil. Chef say that poking it between the eyes with a sharp object is best since it is a swift death but think of what it does the one killing it?

When lobster is cooked, and then cracked open, inside is a goodly amount of pinkish flesh like velvet in certain spots, begging to be eaten. There is also a green substance, known as tamale, and if the animal is female, a pink substance, known as coral. The tamale is the lobster's liver and the coral is is the reproductive bits. Both are excellent on their own or on crackers.

If you are so motivated, save the shells, and the tamale and coral to make fish stock. If you like playing with your food, there is nothing like the day-long, many stepped process of lobster bisque! Lobster bisque relies on a good stock which means cooking down the shells. If there are clam shells left over from a lobster feast, or even corn, throw those in there too. The more the merrier.


how to cook lobster

1- stock pot with lid, large enough to fit either two or one lobster in for steaming
2 lobsters, or however many you need
water or sea water
2 sticks salted butter (optional)

one full day
lobster leavings from feast
(this can include clam shells, tamale, coral, tomato, corn, but not lettuce or hot dogs)
sherry
cream
left over lobster meat, a cup will do

note: all of the steps below may need to be done in stages, based on how many lobsters and other shells are used to make the bisque.

cook down all shells and other remnants of the meal in stock pot
wait for one to two hours - play cards
strain reduction from shells - set aside*
remove the shells from the rest off the left over stock
bake shells in 400 oven for fifteen minutes
remove shells from oven
allow to cool - read the paper
take shells and place in paper bag
take bag outside to porch, deck or driveway or stoop
hit shells in bag with hammer until all shells are splintered
melt one stick of butter in large fry pan
slowly cook shells splinters until they have infused the butter with all of the flavor that they have left. do not let butter burn or brown too much. this must be watched carefully. no card playing or reading the paper
once the shells are cooked in butter, go get some cheese cloth.
if you don't have cheese cloth, either a thin dishtowel or old nightgown will do
shells and butter are squeezed in cloth to extract lobster infused butter
now combine lobster infused butter with stock
bring stock to simmer
add 2 T fresh tarragon, 2 T fresh thyme
add enough cream to provide proper texture; not to thick, not too thin
add sherry, judicious amount
after adding the sherry and taste seems about right, add lobster meat, salt and pepper

*stock alert: if, after combining your stock with lobster shell leavings, the soup still doesn't seem flavorful enough, add about four cut up tomatoes and cook for another half an hour before adding cream and sherry.

this will provide a wonderful creamy deja vu lunch for last nights meal.
Posted by ValleyLocavore at 9:20 AM

Something new for school...... Those teachers, administrators and others interested in  starting or enhancing a garden at your school can sign up for a workshop with the teaching farm Seeds of Solidarity taking place on August 12, 2011. 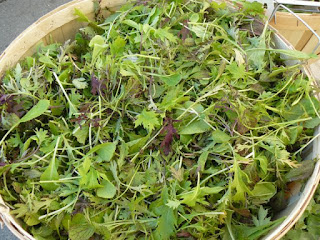 Also welcome are community organization that partner with schools as well as parent groups excited about school garden.
This popular workshop featuring school garden and greenhouse techniques, curriculum connections, and service learning, is held amidst the abundant gardens at Seeds of Solidarity (www.seedsofsolidarity.org) in Orange, MA.
Participants will leave with great ideas that can be cultivated as soon as school starts and throughout the year. Registration required.
Posted by ValleyLocavore at 9:48 AM

Recipe of the Week: EAT A PEACH 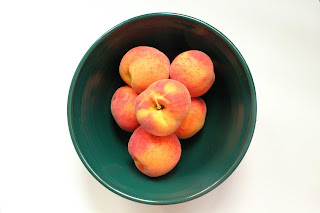 Recipe of the Week: Peach crisp

Bashista peaches from the orchard in Southampton were picked a bit early, the owner allowed. after ripening and a photo session, they were ready to eat.

the best way to eat a peach is raw and the second best way to eat a peach is in a crisp, merely because if it isn't exactly as ripe as it might be, liquid spurting out of it so why not cook it with another fruit in season such as blueberries so the fruits can do a co-mingle in the heat under a nutty blanket of granola. Here is the recipe. Be sure to bake during dinner.

6 peaches
1 box blueberries
1 C. granola, your choice, the more local, the better, lots of people make it, you can too. This recipe is by Alton Brown and uses non-local ingredients such. Standby for the locavore version as soon as I can find some local oats, a substitute for raisins and get started next month when the chestnuts are in season.


Peel peaches, slice and toss into glass baking dish. Add blueberries. Top with granola. Cook at 380 for 45 min. Serve with local yogurt or some other creamy substance to offset the tartness of the berries. If that isn't sweet enough for you, dilute some honey with hot water and throw that in with the berries and Bob is your uncle.
Posted by ValleyLocavore at 3:11 PM

Restaurant of the Week: Magpie 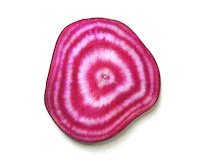 Posted by ValleyLocavore at 2:31 PM

bust a move, lend a hand....
Summer of Love in Greenfield
It takes a whole community to make a great community event. Free Harvest Supper requires a dozen organizers, 100 volunteers, 45 farms, a dozen organizations, and countless home gardeners (along with over 500-700 hungry diners) for the event on the green in Greenfield. We're looking for volunteers, food donations and helper types for the day of the event, Sunday August 21, 2011 from 4:30 pm to 6:30 pm.  Share the love...eat, drink and help out. Visit Free Harvest Supper, contact  info@freeharvestsupper.org or call 877-925-2999.
Posted by ValleyLocavore at 6:00 AM