My man wants to learn to can.  Really! So we're starting with the easy stuff. 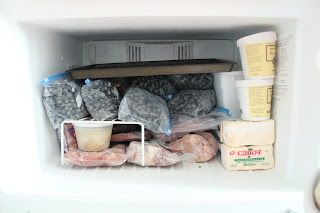 Blueberries a) because they can be frozen, b) because first you turn them into tiny blue frozen ice cubes by spreading them all out on a cookie sheet and then into freezer for only a bit of time c) before dipping the cookie sheet into a bag, frozen blue ice an be consumed right now (or in January with Prosecco) and finally e) no messy clean up.

Total time: around 15 minutes, not all at once, not counting buying flats of them, not including shopping around for the best price, not including regret that we are a bit past the season, not including glee and thanks that we finally did score some grown in Westfield, big, beautiful, plenty to last us a year.

This is not canning but we are 'putting up' food for later. Not much later but later, all the same. Next we will do Peaches.