Is eating corn in public an act of of civil disobedience? 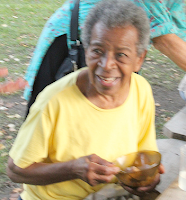 Food from the littlest farm up in Heath
to a volume potato operation in Hatfield was offered to all who came. Families of all stripe, the poor, the rich, the dentists, the church sexton, the two politicians. Those who carry water and chop wood broke stride to attend.
The sun came out after a flash of rain. Up in Greenfield under the trees on the common, people queued up, plates and utensils in hand. At the end of the line were tow rows of tables laid out with food. Pizza made with local wheat with heirloom tomatoes was passed as an appetizer. Along two rows of tables, plates and bowls set forth the fruits of this summer’s bounty. Eggplant with feta, corn on the cob, a wheatberry salad with blueberries, and peaches as well, in slices, served with turkey breast from a farm up in Wendell.
This feast, also known as Free Harvest Supper, is the ultimate local food challenge. Every year a small group gets together to plan the supper. They meet in the upstairs of the Greenfield Co-op early in the year when they begin dividing up chores. The chefs coordinating the event (Of Hope and Olive and Magpie in Greenfield) never knows what they will get in but as the bushels and boxes come in overflowing with produce, some how they figure it out.


Now in its seventh year, the supper came together this summer on Sunday, August 21. The tables were set out, serving and eating tables were set up, and the line for supper snaked around the block. It was a diverse crowd, as always.
She was pretty quiet sitting there, under the trees. But that is her usual demeanor. Although the 700 or people around here did not know it, the Free Harvest Supper was Juanita's idea. It all came about around eight years ago when Juanita said to friends, "Wouldn't it be great, if everyone in this town could just sit down to supper together?" Juanita grows her own food. She believes that sharing food with neighbors is not only nice but is a way to avoid violence. “You wouldn’t fight with someone if you needed their food, would you?”
Juanita Nelson, widow of Wally Nelson, knows about violence. Her husband was a freedom rider in the early sixties when he and eight other guys boarded a bus bound for Montgomery Alabama and rode into a shit storm that made history. Violence against blacks, long standing in the south, was writ large during this confrontation once news photos that circulated. The pictures showed the protesters being beaten and attacked with fire hoses and dogs. Old habits of racial hatred were broken and so were bones.
In the sixties while Wally and Juanita were civil rights activists and non-violent peace protesters. They continued their activism in various forms here in western Mass for several decades. The lived in a cabin without electricity, they protested military expenditures by refusing to pay taxes and lived simply, like Buddhists or activists but their lifestyle defies labels because it is an object lesson.
Wally’s early efforts against segregation had an international impact. Five years after the Freedom Riders trip Montgomery Robert F. Kennedy was invited to South Africa by an anti-apartheid group to speak about racial inequity. In 1966 at the University of Cape Town he made a speech with the now- famous "ripple of hope" paragraph:
"Few will have the greatness to bend history itself, but each of us can work to change a small portion of events. It is from numberless diverse acts of courage and belief that human history is shaped. Each time a man stands up for an ideal, or acts to improve the lot of others, or strikes out against injustice, he sends forth a tiny ripple of hope, and crossing each other from a million different centers of energy and daring those ripples build a current which can sweep down the mightiest walls of oppression and resistance."
Now the speech and the event are famous although the individual who invited RFK was put under house arrest and not allowed to attend the speech and a photographer recording the event was ordered by police to pull the film out his camera.
Juanita's tiny ripple of hope continues to sweep along the Connecticut River Valley in the form of Free Harvest Supper and in other ways. Her husband Wally died several years ago at 93 and Juanita is now in her 80’s. She continues to grow her own food but now with lots of help from friends. As much as she can, Juanita continues to live off the grid in a community that shares what it has with one another.
At Free Harvest Supper, I was taking pictures of this community, of Shenandoah from “Whole Lotta a Hoop” who was dancing in front of the tables at one point, along with the a guy from the Greenfield Recorder. After he got his shot, I continued to photograph the scene. Each shot seemed better than the one before. A man appeared in the frame. I continued shooting because he wore a scarf imprinted with the American flag. As he got closer, I noticed his face was extremely angry. Then his angry face filled the frame. I put down my camera.  “Do not take my picture,” he shouted. Buddhists breaking stride in their routine of carrying water and chopping wood looked on with interest. “I did not give you permission to take my picture. You can’t take my picture, you can take her picture,” he said gesturing to Shenandoah, “and you can’t take anybody’s picture without permission.”
“Ok,” I said.
“You cannot take picture without people’s permission,” he said, still shouting.
“But this is a public event,” I offered. After all I wasn’t doing this for money or for a newspaper….it is legal to shoot pictures in a public setting.
He began to walk away and I picked up my camera again relived. He turned around and lunged into my small footprint and said, “erase that picture, in fact, erase all of those pictures.”
I said, “sure” and picked up the camera, looking him in the eye, and pressed a tiny button. It was a fake gesture. He walked away. I looked around and people seated nearby were munching on ears of corn, contemplating whether or not to continue shooting. Then the guy with the American flag scarf came back. “All of them,” he said. “Delete all of them!”
I looked up to where Juanita was sitting under the trees, looking calm and at peace with the universe. I looked back the guy and said, “Will you forgive me?”
He forgave me and walked away.
It was winding up at Free Harvest Supper around 6:30 and the food was being put away. I approached Juanita to chat and requested with respect that I take her picture, "Well, no," she said after I had taken several.
There was still some food left on her plate--some of the yogurt from a farm in Colrain and several slices of tomato from one of five farms, from the look of it, exotic, maybe Danny Botkin's in Gill.  She looked at the crowd, heading home in the fading light and said "Wouldn't it be great if other towns could do this?"

Posted by ValleyLocavore at 12:43 PM