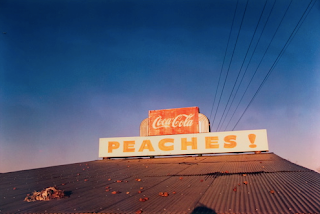 Well, due to time constraints and fruit flies, my man didn't get to help with the peaches. In the end, I processed only six jars worth of and froze the rest. For two reasons: a) processing is a hot, sweaty, labor of love and slime. If you don't jump on it when the peaches are on the counter, right in from the orchard, you get a house full of guests in the shape of small winged insects. b) freezing is fast. My man, although interested in canning, is like most. He is attracted to canning the way people are attracted to arcane old ways such as caning chairs or whittling an apple into a figure of the last supper. Interesting in theory.

We didn't have time for 'processing' five bushels of rotting peaches together but I did and now the two of us will enjoy the bounty of summer and fall in the form of fifty gleaming jars of tomatoes and peaches  lined up on the top of our cabinets in the kitchen. Many of the peaches had to be frozen rather than canned. Canning is more beautiful and takes less space in the freezer but as Tim Wilcox recommended on his blog you really can get away with halving them and throwing them in a zip lock for a deep freeze. To can peaches, meaning skin, core, cut out nasty bits, shove in clean jar and 'process' in a massive canner, take a certain amount of focus and man power. Also peaches are so fragile they wither before your very eyes. In the nation of preservation, time is of the essence. Nature and peaches as well as tomatoes and cukes wait for no one. If you don't act fast, it is humans zero, fruit flies one.

Two years ago I canned maybe 12 jars of tomatoes which lasted me until Christmas. Last year I did 24 which lasted me until February. This year I have 42 which is ten less than on can per week which is about what you need if you figure tomatoes won't be in season again till August and then you have only about eight weeks. Obsessive? Well, see what you have to eat in January when a winter share produces bunches of kale, potatoes, maybe a leek or two and enough cabbage to feed all the Russians in West Springfield. Cost? About $2 per jar not including the jar. Time? I won't lie to you. It takes lots of time. Maybe a couple or four full days?

This year we have captured and put up the following for winter: 10 bags of frozen oven roasted tomatoes, good for making ketchup, 15 bags frozen blueberries, good for any winter repast requiring fruit, pickles in a crock fermenting away, a gallon of cider that will get hard as the fall progresses, good for getting drunk, and, thinking about all this conjures the picture of a housewife on the cover of Life Magazine from around 1962 where she is sitting on her front lawn with all of her possessions strewn around her. That is what it is like putting up food for winter. All of your food is just there, in front of you, lined up and ready for the coming of winter and whatever else nature might have in store this year.

Posted by ValleyLocavore at 4:07 AM