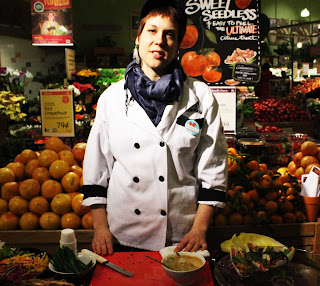 Recently my mother
lost the whole notion of a yearly, holiday 'cookie party' and replaced it with something entirely different.

Instead of women from the neighborhood coming over in the late afternoon bearing shortbread and chocolate kiss peanut butter cookies in metal tins, there will be only wine. No food, just wine.

Since my father died, she hasn't been the same. After a few weeks of mourning, she moved into hyperactivity. Things were being eliminated. Old clothes, papers and now the cookie party, out the window. The idea for "Wenches and Wine" came from her sister in New York. So now, typical mom gifts such as a scarf, a nice book or a tasteful print are out the window. This year mom is getting booze for X-mas. Her favorite is "chard" of the Three Buck Chuck variety.

A trip to Whole Foods in Hadley (no wine at this Trader Joe's) to test the latest holiday samples revealed two surprises: Wine fit for a discerning wench and Veggies (some) fit for a locavore.

VEGGIES
Marqulela Stevenson (pictured above) offered shoppers endive boats last week at Whole Foods. Parked just inside the front doors, Marqulela offered samples of the veggie with a dipping sauce. It was a rainy night. Many shoppers came by and devoured bits of endive boats that contained tofu from Connecticut, and watermelon radish from Vermont and carrots from Winter Moon farm in Hadley. Oh, holy night. I learned from Marqulela that the carrots, 500 lbs of them, are periodically hauled to the store on a bicycle from Winter Moon Farm on Bay Road to Rt. 5. Dipping sauce: peanut butter, rice vinegar, lime, soy, sesame oil, none local, delicious and might be replicated with maple syrup, rhubarb reduction, sea salt from the Cape and melted butter. But that is for purists.
WINE
In the wine department a is guy giving out samples of Chardonnay, Cabernet Sauvignon and Merlot which sells for $35.88 per case. Called "Three Wishes" the wine comes from California vineyards with wine to spare. According to Don Williams, head of the wine team at Whole Foods Hadley, this is not just extra wine with a Whole Foods private label, it is quite "quaffable." Two reasons: recent years in California have produced consistently good vintages; and vineyards have made quite a bit of it. The wenches found "Three Wishes" to their liking. Responses ranged from "lighter" to "maybe just a third glass." Patsy will give a case to her sister who will share it with New York wenches.

The California wine isn't local but the negative carbon footprint carrots from Hadley are a plus.
Posted by ValleyLocavore at 2:00 PM