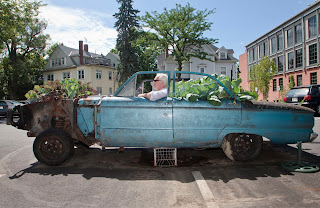 Last Saturday night, Green Street Cafe's final supper, the place was hopping. Food, fireplace and jazz were in full swing and although by 7:30 they were out of pirogi in brown butter and lamb meatballs with hand made noodles. But what they had left was better than anything else you can get in town.

GSC owners Jim and John never stinted on quality, never compromised which was why the food was honestly good, why they had their fans, why they were so intense. John and Jim made the soup Nazi look like a neophyte.

For the 20 or so years Jim and John were in business, they insisted, in their way, on perfection from their wait staff, the best food that they could afford and at times could not afford and in summer grew their own produce for the restaurant. There was a grill outside on Fridays featuring lamb burgers, in summer, along with Jim's heirloom tomatoes.

Winter featured a lovely menu including the weird yet delicious duck leg cooked in the fireplace and mussels, cooked in a mustard wine sauce and served with bread.

Always in season was the ongoing battle with next door neighbor, Smith College. Smith was the landlord and has been trying to throw them out for years. Basically they wanted the place back. It didn't fit in with their expansion plans and Jim and John went down swinging. Little details like the wrecked cars in the parking lot that abutted Smith's engineering school (see photo above taken by Paul Shoul) was the latest Green Street's latest retaliation against their oppressors.

Now John and Jim are moving on. "We're doing a CSA," says John. "I want to sell 1000 shares!" he adds, just to throw down yet another gauntlet. But they were good to their staff and to some regulars who called the place home for a while.  Family dinner, a restaurant tradition of feeding the staff before diners show up, was always on the table. This can't be said for most other restaurants. It is pretty old school and requires management that cares and treats the staff like family. Of course, family takes many forms.

In the middle of service on Saturday, the band called Jim over to sing. The place fell silent when he raced down the stairs. Sidling through the crowd to grab the microphone Jim fixed a withering gaze on his guests. "This is dedicated to the staff," he said and began to sing, "You Make Me Feel So Young."

Goodbye John and Jim. You gave more than what you got.
Posted by ValleyLocavore at 3:16 PM