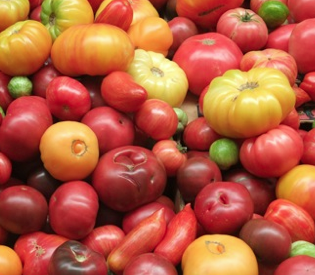 Chutney is great with potato or whole wheat bread. Serve along with yogurt to bring down the acid and provide a good ying and yang effect. Very nice with chicken thighs or lamb kabobs. And the colored heirlooms make it gorgeous.


Peel, seed, and chop tomatoes. In a heavy bottomed sauce pan, bring vinegars to a boil with the honey, salt, pepper, and chili. Stir in the tomato, peppers, and onions. Simmer mixture very slowly, uncovered, stirring frequently, until mixture is reduced to about 2 cups, about 1 1/2 hours. Store in the refrigerator.

Posted by ValleyLocavore at 1:17 PM

Yield - HOW MUCH TO BUY TO GET ME THROUGH THE WINTER?

YIELD:
One bushel of fresh tomatoes weighs 53 lbs and yields approximately 18 quarts of canned tomatoes or 15 to 18 quarts of juice. Approximately 2-1/2 to 3-1/2 pounds of fresh tomatoes makes 1 quart of canned tomatoes.
So if you want enough tomatoes to get you through the year until next August and you are the type of cook who would use a jar of tomatoes every two weeks, or so, then plan on 36 quarts. That's three cases of Ball  Jars and two bushels of tomatoes. I recommend "plum" or "roma" tomatoes because the have the least amount of water and provide a "base" for making sauce in winter. Add dried herbs now or when you cook up the sauce later.
Posted by ValleyLocavore at 1:10 PM