New Chef in Town -- Here for the Soil

“As a chef, I am very excited about the food here...” said Sandy from his teaching kitchen in Hatfield.
Last month WGBY ran a documentary that featured local farmers. In “A
Long Row in Fertile Ground,” several hold forth on the topic of out
topsoil. A farmer from Hadley claims that Valley soil, loamy soil to
be specific, is the best in the world. Another says his fields have
topsoil that is 15’ deep. Geography is the reason for the quality of
the soil. Our Valley is in the middle of what was once Lake Hitchcock,
a result of melting glaciers from the ice age. Over time, the water
receded and left a combination of silt and clay that is very, very
good for growing food.
If you’ve ever put a shovel in the dirt in your backyard, you know
that 15’ of top soil is truly a phenomenon. In the documentary an
outsider appears on the scene. He has been hired to till a potato
field. The outsider tells the farmer he has never seen such soil and
tells her that his tiller cut through it like it was chocolate cake.
Recently, a very accomplished chef and his wife moved here from the
mid-west and put roots down in Hatfield. Sandy and Angie D’Amato
purchased a bungalow and added a wood fired pizza oven with the
requisite chimney and expanded from there. Now their home and cooking
school called the “Good Stock Farm,” features a gracious interior where
classes of up to eight people can gaze out onto the source of the
Valley terrior. It is a gracious learning environment that lends
itself to tasting and deep contemplation of food and wine.
After planting peach trees four years ago just after purchasing the
property they produced over 90 lbs of peaches on two of the trees. Sandy
D’Amato stands next to a large wooden table in the kitchen of the Good
Stock and holds a glinting glass jar of peach jam exclaiming,
“Suncrest!” The tree in question can be seen from the window.
Sandy is a James Beard award-winning chef. He and his wife Angie have
traveled the world teaching and tasting. During harvest season they biked in
Tuscany where they celebrated with Schiacciata (fococcia and local grapes)
and every spring they travelled to vineyards in northern California to sample
wines for the two restaurants and bakery they owned in Milwaukee.
Both say they have never had corn like the corn they buy up the road
at the Golonka stand. And that the asparagus is just as epic…..  They
are not strangers to fresh produce, nor are they strangers to the food
scene in the Valley.
“As a chef, I am very excited about the food here,” said Sandy from
his wood and glass kitchen on Main St. in Hatfield. “The asparagus is
different than that of the mid west and as for the peaches, they are
exemplary. The farm starts here and they pick it on the same day.”
They also have a garden in the clearing that runs from their place to
the west side of the Connecticut. They day I visited, the second week
of November, the kale looked very healthy, just like the towering
stalks up and down River Road.
Sandy goes to the pantry in his place to retrieve pickled garlic
scapes, Scandinavian style (cardamom) and raspberries and cherries in
vodka. The peaches and garlic scapes are his, the raspberries from

Harry, a neighbor, and the cherries are from Clarkdale Farm in Deerfield.

“This entire corridor up and down the river from Clarkdale on down is
brilliant,” said Sandy. “But it isn’t just that, it is also the
excitement of what’s coming next!” he exclaims. “Once you think you
can’t put another spear of asparagus in your mouth, the strawberries
are here.”

Sandy and Angie met in 1980 at John Byron Restaurant in Milwaukee. He
was the chef and she was a cocktail waitress. Both were from grocer
families. They married and started a restaurant called Sanford, also
in Milwaukee, in 1989 with an SBA loan for a 50-seat fine dining
establishment after bring turned down by 12 banks. A female loan
officer shared their vision. At the restaurant, Angie was in charge of
the wine list and wrote wine notes for the serving staff. They
expanded the operation to a bistro and a bakery. At their busiest they
had 100 employees. It was on a cruise to China and Russia during the
D’Amato’s 25th wedding anniversary that the couple had enough time
away from the stress of running three restaurants for perspective.

It was then that they decided to take it down a notch or two. Now
they’re in the Valley, putting up their fruit, making friends,
teaching the finer points of cooking and living their motto: “Life on
a slow simmer,” but what a simmer it is. 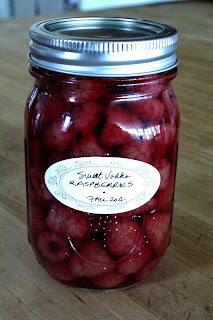 Posted by ValleyLocavore at 4:06 PM