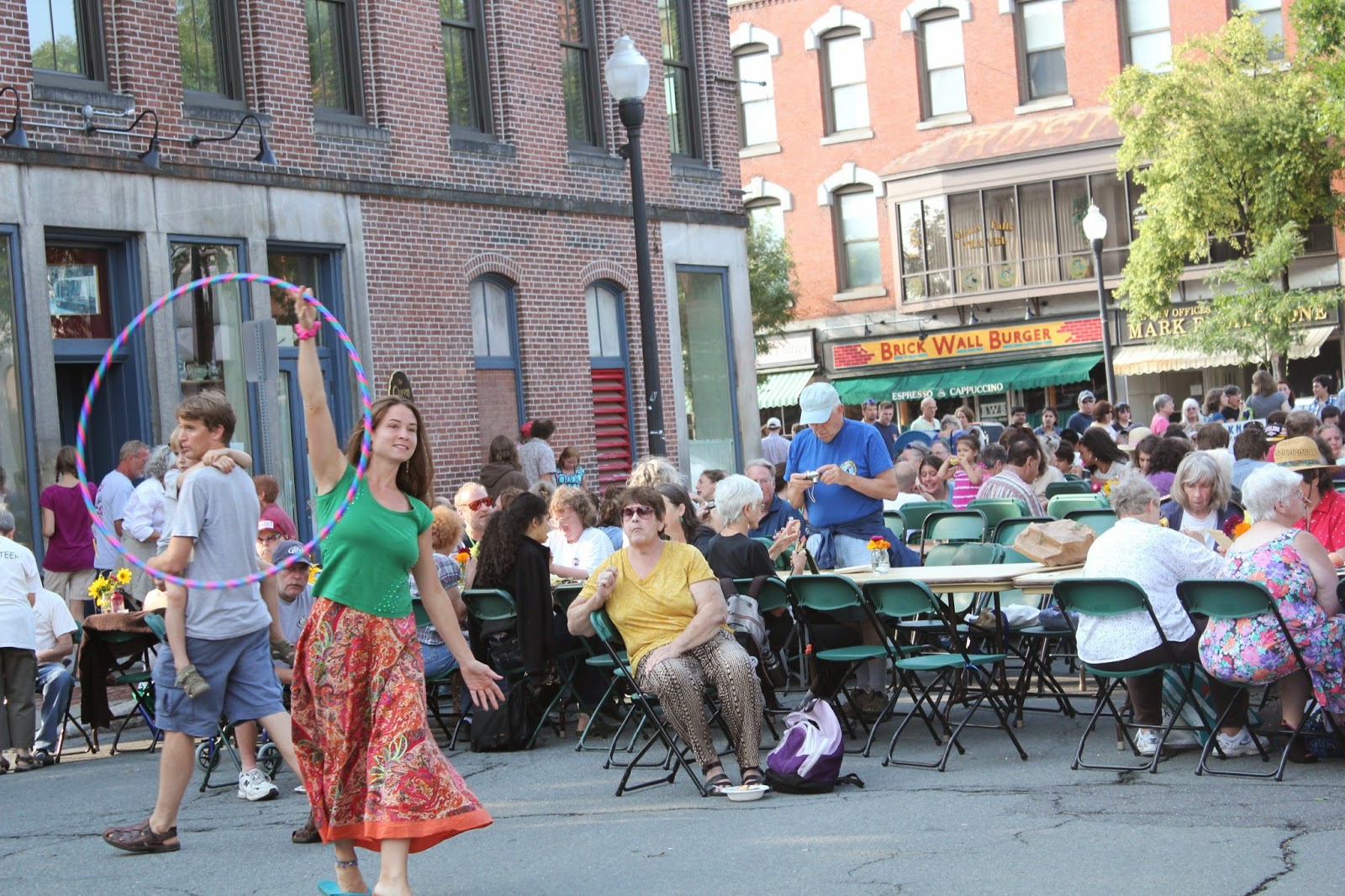 By MARY A. NELEN

EASTHAMPTON -- Summer people line up under a leaf canopy on the green.An al fresco supper awaits them. Sunflowers hold down 40 flutteringtablecloths and a hula-hoop woman cavorts with a red-headed boy inface paint. Laughter is heard over an insatiable appetite for heirloomtomatoes and pedigree peaches.

It's high summer, the kombucha is being poured and everyone is happyin the city of Greenfield. Last year over 1,000 souls were served atFree Harvest Supper, an annual event, where food left over from theharvest is shared with one and all, rich and poor.It all started years ago when someone whispered something to someoneelse at a Saturday morning peace vigil. That somebody was JuanitaNelson. She was spending Saturday as usual, marching around in frontof the green. Juanita and others carried hand-made signs that read“End Violence Now!” and “Guns into Plowshares.” Cars and pickup trucksdrove by and honked, sometimes in agreement, sometimes not.It was August and the Farmers Market was in progress. Farmers withleftover produce were giving it away in the final half hour of themarket. During a lunch break and while eating a tomato, raw and warmfrom the sun, Juanita got an idea. She looked at her friends and saidin a whispery drawl, “There are so many farms around here, why don’twe just collect all extra harvest and feed everybody?” Juanita’s voiceon the radio is how I first got involved as a volunteer for FreeHarvest Supper. It was about seven years ago. A DJ from WMUA askedabout her politics.“I don’t get it,” he said. “What does sharing food have to do with theanti-war movement?”Juanita replied, “If you know who grows your food, if you depend oneach other for food, you’re not going to fight with them, are you?”Juanita Nelson knows something about violence. She met Wally Nelsonwhen he was in jail and on a hunger strike. Juanita was on assignmentfor a local paper to interview the man who participated in the firstwave of Freedom Riders protesting segregated transportation in thesouth. Juanita’s first act of civil disobedience was to eat lunch inthe whites’ only section of a Washington, D.C., restaurant which gother arrested and kicked out of college.She and Wally were perfect for one another. They moved to Woolman Hillin Deerfield in the 1970s and lived simply growing all their own food.With a community of like-minded souls, they put up what they grew forwinter consumption.That community resulted in the formation of the Greenfield FarmersMarket, the Pioneer Valley War Tax Resisters and the Valley CommunityLand Trust. Wally lived to be 93 and Juanita, now in her 80s, lives inGreenfield, inspiring Winter Fare (the first winter market) and FreeHarvest Supper.Juanita and Wally were onto something with their garden. The hegemonyof processed food with its addictive cycle of salt, sugar and fat hasput the nation into a diabetic coma. Eating is an act of intimacysecond only to sex. Surely you want to know where your partner hasbeen. Should food be any different?We have the advantage in the Pioneer Valley of good soil and farmerswho give their lives to the work. Grow your own, buy local and learnto cook. Not only is real food better for you, it tastes like freedom.

Mary A. Nelen is a writer and photographer who lives in Easthampton.
Posted by ValleyLocavore at 3:03 PM