Recipe for a Demonstration 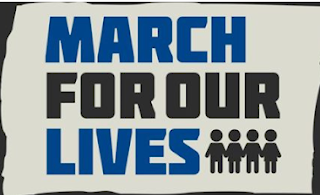 Posted by ValleyLocavore at 12:43 PM Links to this post 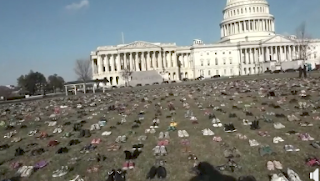 14K empty shoes outside the US Capitol, to represent every child killed with a gun since the Sandy Hook Massacre: http://bit.ly/2DoveZw
Posted by ValleyLocavore at 12:34 PM Links to this post

For Best Results: Make Friends with a Forager

Food can be such a minefield, even something simple like mushrooms have myriad nooks and crannies when it comes to figuring out which ones to eat, where to get them and how to be polite.

Lets face it mushrooms are free. Wild mushrooms are all over the place. The prized morel mushroom grows in cow pies. It’s odd that something that sells for $75 an ounce can be found in cow pies but that’s how it is with some wild food.

You have to know where to look. Mushrooms look for trees to host their growth. They get their life force from other life forms rather than by photosynthesis. That means rotten logs, or trees, or on straw bales which means the woods.  But where in the woods?

Of course a guidebook is of help but who wants to go to the woods alone with a guidebook? The best thing to do is to make friends with a recent immigrant or somebody with strong ties to the old world. There isn’t much difference between mushrooming in Poland or Italy or Puerto Rico than there is in mushrooming in the woods of western Mass.

The Chanterelles pictured here can be found in mid-summer according to  forager friend. These beauties have a fruity, woody flavor and require a gentle hand in preparing.

Chanterelles appear on menus at an expensive restaurants but only on days when the forager shows up at the back door.

My forager friend brought me a bunch of yellow and bright orange chanterelle mushrooms, right out of the blue. When I asked where his bounty came from, he changed the subject.

The chanterelle is delicate in form and flavor. Never wash a mushroom. They are quite porous and you would be too if you spent all your time in the woods. The best thing to do is to brush the dirt off with a cloth or a mushroom brush. Traditional cooking technique suggests sweating the water from chanterelles in a pan over low heat. By extracting the water, the subtle flavor of woody combined with fruit is revealed.

Chanterelle’s are known for having an apricot flavor, their color even matches the fruit. Foragers claim that when searching for this rare delectable, they can pick up the apricot scent right there in the woods. I wondered, aloud, if my forager friend was alerted by their scent when he happened upon the chanterelles. “No,” he said.

We were sharing a glass of rose wine. The mushrooms were so delicious we didn’t speak for a time and instead nibbled on some crusty bread. I asked again about where he found the chanterelles and he responded that foragers all have secret spots. If everybody knew about them, there would be nothing left.

But I asked again anyway, because what would it hurt if just one more person knew about the secret spot? His answer was slow to come. He looked at me and then out the window.

After a long pause, he shook his head and said,
“Mt. Tom.”

Mt. Tom is vast, an entire mountain with lots of rotten logs and trees everywhere you look. I would have to marry the guy to find out his secret spots and he still he might not tell.

Mushrooms are very porous (you would be too if you spent your life on a rotten log) so avoid getting them wet. Begin by rubbing the mushrooms gently with a cloth or a mushroom brush to clean them.

Trim the stem to eliminate the blunt end of the stem. Leave them whole and heat in an earthenware or enameled pan on low heat with the lid on.  Cook until the liquids evaporate and prevent the mushrooms from sticking to the bottom of the pan. Add a couple of tablespoons of butter with salt and pepper. Cook for a few minutes until tender.  Just before serving, stir in about a half a cup of heavy cream and pour into a dish.

Recipe influenced heavily by Patience Grey's description of mushroom treatment in "Honey from a Weed."

Posted by ValleyLocavore at 10:59 AM Links to this post

The night before last......
we ate at a new place near us in Kinderhook. On special was a thing of beauty and wonder, a thing I had to try in my own kitchen. This is referred to by a man I know as "Reverse Engineering." Whenever he eats something in a restaurant that he find particularly enjoyable, his wife Robbin goes home and figures out how to cook it, right away. Tom calls it “Reverse Engineering” but I call it love.
The thing of beauty and wonder was Beet Tartare, a jeweled little tuffet of beets on a bed of arugula. It had a sweetness and a velvet, pliant mouthfeel. Where was the sweetness coming from? Perhaps the frozen earth prompting the beet to produce sugar? Reduced balsamic? Maple Syrup? Pomegranate seeds? And the pliancy? These certainly weren't "tartare" raw beets, or were they?
Reverse engineering began with googling "beets" and "raw" and "salad" and consulting cookbook indexes for “beetroot." What resulted was a co-mingling of technique and what I had in my larder. My recipe for Beet Tartare At Home is restaurant perfect. It uses roasted beets, chopped almonds, onion, garlic and a bit of balsamic/fig syrup from the cupboard. (It must be said that "tartare" is a misnomer. The first taste experience of this dish was sweetness, the kind that comes from roasting winter beets.)
As for the shape of the beet thing of beauty and wonder, I didn’t have molds to create a disk like the one used in the restaurant. Instead I employed those little white dishes that are nice for salt and stuff. Starts with a C?

I placed the each beat disk (thee out of four held their shape) on a little bed of arugula, dressed in oil and white wine vinegar with salt and pepper and then drizzled a bit of balsamic/fig juice on top and it was perfect. Just as good as at the new restaurant, if not, dare I say it, better.

Posted by ValleyLocavore at 12:00 AM Links to this post