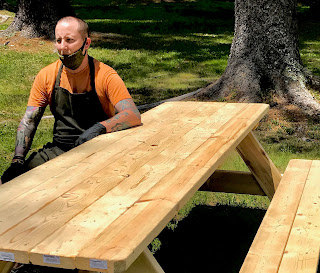 By Mary A. Nelen


If you told Nick Moulton he would be a TV star one day, he would tell you to get back to chopping onions. But when he got the call, the North Adams native who had never been on a plane found himself flying off to Santa Rosa, California, racing around in a faux supermarket called Flavortown with other chefs.

Moulton competed with three other chefs on Guy’s Grocery Games in its 23rd season last year on Food Network on an episode called “Five Dollar Dish.”

The supermarket-themed cooking competition challenged four chefs to cook a sweet and savory brunch for $20 that would feed four people. Moulton’s entry, Ragout of Roasted Mushrooms, Crispy Brussels Sprouts, poached egg and sweet corn puree cost him $15.91 in groceries. The judges praised his execution and Nick went to the next round, “hot lunch” which Moulton sailed through with a produce laden Pasta Primavera for less than $5 per plate earning him the title “Veggie King,” from host Guy Fieri. In the third round, Moulton’s Moroccan Chick Pea Stew with Mahi Mahi and Shrimp left him the last chef standing and the championship resulting in a cash round. A massive LED clock began to tick and Guy Fieri rattled off clues to items for Moulton to fetch among the aisles with a monetary prize for each correct pick. “Time’s Up!” shouted Fiere and a slightly sweaty yet elated Moulton looked at the camera and said, “Babe, I’m coming home, we got $16,000 for the kid’s college fund!”

Moulton returned to Flavortown to tape Guy’s Grocery Games, “Big Budget Bonanza,” where he achieved champion status and earned an additional $20,000 and in 2020 was invited to return to the set in Santa Rosa to compete in a tournament called Summer Grillin Games. The show aired on July 8.

Back at Mezze, Moulton sits amid the newly milled picnic tables on the restaurant’s verdant grounds in Williamstown. The executive chef reflects on how the TV show competition and COVID-19 have changed him and Mezze.
“Grocery Games was a way for me to break out of my comfort zone,” says Moulton, an unassuming individual with piercing light eyes, a COVID-19 buzz cut, and an exuberant display of shoulder-to-wrist tattoos.

After more than ten years at one of the Berkshire’s most dedicated and refined locavore dining establishments, Moulton’s comfort zone means overseeing every single dish that goes out during service. Although he excelled at sports as a young man, he chose to attend the Culinary Institute Arts. He became Mezze’s executive chef in 2014 and also has been guest chef at the James Beard Foundation since 2010, presenting the culinary artisanship of the region with a team of his Berkshire peers. He was previously head chef at Public Eat + Drink in North Adams, sous chef at The Orchards Hotel in Williamstown, and worked in the kitchens of other Berkshire notable restaurants.

Although not the type to put himself at the mercy of a TV audience, food is home plate for the chef. “Food was celebratory in my house,” he says. “It was a big deal to have everybody at the table. Mom made enough to feed an army, the whole family together with boyfriends and girlfriends at the table.”
Moulton landed his first job in a restaurant as a dishwasher, but he was quickly pulled over to the grill and was told, “Cook!” He has never looked back, drawn to the fast pace and the high volume.

The restaurant world, like everything else, is in significant transition. When Mezze closed in March and all but four employees were laid off, Moulton has several weeks to spend with his family that resulted in his own series of what it’s like to have a chef in the house. In daily videos on Instagram, some featuring breakfast, others snacks, sometimes dinner, all of Moulton’s multi-tasking came to the fore in his own kitchen. With an infant on his hip and two curious young boys at his side, there were countless interruptions, spills, and inspirational moments for housebound viewers.

During this time, Moulton and his core group at the restaurant got a chance to reconsider how they were doing things at Mezze Restaurant Group. “It made me grateful for this time to think about how I want to spend my time,” he says. “Do I want to keep doing the refined food where I have to review each plate before it goes out using tweezers for garnish?”
For half a decade, Moulton and manager Nancy Thompson had been talking about making a shift to “fast casual” food at a new location potentially in North Adams. The pause provided by COVID was the opportunity to give fast casual a try with a new menu, scaled down for take out.

“When we were featuring the burgers on Thursdays early on during COVID,” says Moulton, “people kept coming back for more.”

The core team of four people created an online ordering system for takeout and reopened in late April. The Mezze Roadside Under the Pines features a socially-distanced outdoor dining concept with an outdoor grill and picnic tables. Like many other places in the Berkshires, it takes advantage of the natural beauty featured on the land.
“We are cooking the food people want right now—Smash Burgers with fries that go down easy,” says Moulton. Also on offer are grass-fed hot dogs, cheeseburgers, Okie Burgers, (beef and shaved onions) sides, salads, and desserts.

As an early proponent of the local food movement, Moulton’s relationships with area farmers goes deep. Nearby East Mountain Farm turns Mezze kitchen scraps into compost for its heritage pigs. “What they don’t like is corn husks,” notes Moulton. He finds use for them anyway, which is stock used for corn soup, gazpacho, and a nice chilled version of cucumber soup with a bit of extra-virgin olive oil as well as the desert known as Pavlova, a meringue-based confection finished with whipped cream and in Moulton’s version receives a light dusting of roasted dehydrated corn husk.

This cycle of life—a plate of food, compost for the pigs, compost for the vegetable garden, and back to food on the plate continues in a new, post-COVID Mezze Roadside.
Posted by ValleyLocavore at 8:42 AM